Danish is my mother tongue but Swedish is my grandmothers tongue and it talks to my heart like no other language. 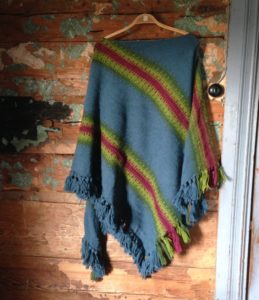 Ever since the Facebook page: Carl Larsson-gården, started sharing letters from the Swedish painter Carl Larsson to his wife Karin Larsson, I have been hearing one of his opening lines in my head:

At the same time I got to know the Swedish yarn, Ullcentrum.

I made some different test project in the 1-ply lace yarn but the 2-ply yarn keept calling.

For a long time I had no idea what to make from it until the universe of Karin Larsson began wrapping up around me asking me to make this shawl.

With this design I want to take you back to Sweden in the time around 1880 – 1920, to the life of the famous Swedish painter Carl Larsson and his wife, Karin Bergöö Larsson. Karin was Carl’s longlife muse but she was also a textile designer ahead of her time.

My grandmother, Birgitta, was Swedish and in my childhood she had several posters from Carl Larsson in her Swedish house. Posters that made me dream and started chains of thought about design and living.

Years later I learned much more about Karin and how it was her work and design that made their home so unique.

She was an amazing fiber artist and had strong opinions on child upbringing and child clothing.

The inspiration came from her use of traditional Swedish woven fabric. Stripes and structure made in wonderful quality wool.